What You Should Know…

If your business has not updated its employee handbook within the past year, it probably doesn’t inform employees at your workplace about important rights to which they are entitled. That’s a problem.

An out of date handbook which is not legally compliant is a liability to a business. Each business should maintain an employee handbook that strategically and properly aligns the business and management practices of the employer with federal law and the ever-changing laws of California.

A stack of documents and policies simply doesn’t cut it. Each employee should receive a copy of the employee handbook. And, in order for a business to protect itself, each employee should be required to acknowledge in writing that he or she has read the employee handbook, understands the contents of the handbook, and understands that it is his/her responsibility to comply with the policies and procedures set forth in the handbook.

A well-constructed employee handbook provides important guidance to employees. It informs employees of the rules, processes, and regulations that exist within the particular workplace, and provides clear information about performance expectations and requirements. If employees understand what is expected, they are more likely to meet expectations.

What You Can Do…

Let our staff of attorneys help – our services are affordable for every size business and we do all the work!

If your business currently has a handbook, all you have to do is send us a copy and we’ll make the necessary changes to make sure your business is up-to-date and legally compliant. Our attorneys will review and revise your current handbook to ensure that required policies are included and that policies are properly worded. If our attorneys determine it to be in the best interests of your business to have a new handbook created, a new version of the current handbook is provided – at no extra cost!

If your business does not have an employee handbook, no problem! Our attorneys will create one based on answers provided to a simple questionnaire that takes only minutes to complete.

We also offer supervisor and employee training on the contents of employee handbooks.

For a quote for services or more information, please contact Jillian Bruni, MBA, at jillian@lmrcenter.com or 858-753-1775.

This new law amends several California Labor Code sections pertaining to the prohibition against taking adverse employment actions by employers against employees or job applicants for being engaged in certain protected activities, such as exposing illegal or unlawful practices undertaken by an employer or filing a complaint against an employer regarding unsafe working conditions. This law extends such protections to employees and job applicants who are family members of the person who engages, or is perceived to engage, in the protected conduct. Therefore, this law prohibits an employer from retaliating or taking any adverse employment action against an employee or job applicant because he or she is a family member of an employee who has, or is perceived to have, engaged in any protected activity.

This legislation applies to employers of 25 or more employees and expands upon the right of employees of such employers to take a leave of absence from work for school and/or child care related activities. This law allows an employee to take time off to locate a school and/or licensed child care provider and to enroll and/or re-enroll a child in such facilities, as well as, to address child care and/or school emergencies. This law also revises the language used in prior laws permitting such leave that refer to a “child day care facility” to now be referenced as, “child care provider.” The law also defines “parent” for purposes of this law to include parent, guardian, step-parent, foster parent, or grandparent of, or a person who stands in loco parentis to, a child, thereby extending the protections for such time off from work to all employees who fall within said definition of a parent.

This law prohibits employers from using the e-verify system administered by the U.S. Citizenship and Immigration Services, the U.S. Department of Homeland Security, and the U.S. Social Security Administration, to check the employment authorization status of existing employees and job applicants who have not been offered employment with that employer. The law also requires an employer to notify a person as soon as practicable if the employer receives notification from the U.S. Department of Homeland Security or U.S. Social Security Administration indicating that the information entered by the employer on the e-verify system did not match federal records. The law provides for civil monetary penalties up to $10,000 against any employer for each unlawful use of the e-verify system.

This legislation was enacted by the California State Legislature in response to a 2013 California Court of Appeals ruling (Rope v. Auto-Chlor System of Washington, Inc.) in which the Court held that a mere request for reasonable accommodation for a disability or religious belief or observance is not a “protected activity” and does not automatically create a basis for an employee or job applicant to bring a retaliation claim against an employer under the Fair Employment and Housing Act. This law clarifies that an employer is prohibited from retaliating or discriminating against an employee or job applicant for requesting a reasonable accommodation for a disability or religion, regardless of whether the request is granted. In addition, this law clarifies that simply making such a request is deemed protected conduct under the Fair Employment and Housing Act.

This legislation applies to compensation paid to employees paid on a piece-rate basis. This law requires that employees be paid for “rest and recovery periods” and for other “non-productive time”, defined as time under an employer’s control exclusive of rest and recovery periods that is not directly related to the activity for which compensation is provided on a piece-rate basis. Per this law, employers are required to compensate employees for rest and recovery at a regular hourly rate that is no less than the higher of either an “average hourly rate” (calculated by dividing the total compensation for the work week, minus pay for rest and recovery and any premium pay for overtime, by the total hours worked during the work week) or the “applicable minimum wage” defined as the highest of the federal, state, or applicable local minimum wage. Employers are required to pay employees for non-productive time at an hourly rate that is not less than the applicable minimum wage. In addition, this law requires that itemized wage statements (pay stubs) show the total hours of compensable rest and recovery, the rate of compensation, and the gross wages paid for such periods during the pay period. Employers that do not pay an hourly rate for all hours worked in addition to piece-rate wages must also include the following on the itemized wage statements:

This law revises California Labor Code sections dealing with gender pay inequality. The law expands the prohibition on paying an employee less than the rate paid to an employee of the opposite sex, amends the Labor Code by eliminating the requirement that the pay difference be “within the same establishment”, and eliminates use of the term “equal work for equal skill, effort, and responsibility.” This law prohibits an employer from paying any of its employees less than employees of the opposite sex for “substantially similar work, when viewed as a composite of skill, effort, and responsibility.” In addition, the law places the burden of proof on the employer to show that a wage differential is not unlawful, but is instead based entirely upon acceptable and reasonable factors such as seniority, merit, or other good faith bona fide factors in conjunction with a showing of “business necessity.” This law also prohibits an employer from taking any adverse employment action, such as retaliation, termination of employment, or discrimination, against an employee who exercises his or her rights and/or assists another in exercising his/her rights under this law. Under this law, an employer cannot prohibit an employee from disclosing his/her wages and/or discussing wages with other employees, or from asking about the wages of another employee. This law does not, however, require anyone to disclose wages when asked.

This law requires all California based professional sports franchises that use cheerleaders during events, games, and exhibitions to classify such cheerleaders as employees rather than independent contractors.

The Law and Management Resource Center can be your one-stop resource for human resources, employment law, and business management needs. Our solutions let you focus on what you do best, while we take care of the rest!

How are we different from those who try to compete with us? It’s simple. Our employment law and human resource services are provided by in-house, licensed attorneys who are also human resource professionals. Help with business management needs is fulfilled with the additional expertise and knowledge of an MBA consultant. 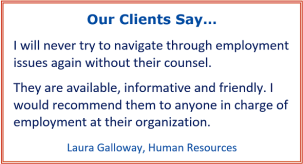 What You Get in Your Platinum Package – You Get All 3!

Unlimited Employment Law, Human Resources, and Business Management Consultation – Contact our staff of in-house licensed attorneys and human resource and MBA business consultants as often as you need to throughout the year for answers to questions and advice for keeping your businesses on the right, compliant track.

Common employment law questions and concerns include:
– how to discipline or terminate a challenging employee and avoid potential claims,
– what are the requirements for overtime and split shift, reporting, and travel time pay,
– how to determine which employees can legally be classified as exempt, and
– how to manage employee leaves of absence.

Employee Handbook – Customized employee handbook, up to date for legal compliance and tailored to your business and its specific needs and policies. Receive an updated handbook each year for as long you continue services through this offer.

Harassment and Bullying Prevention Training for Employees and Supervisors – Unlimited access to online harassment and bullying prevention interactive whiteboard animation training video for your employees. Train all of your employees and provide periodic training for as long as your business is an active consulting client to prevent claims and reduce risks of potential workplace conflicts. Continue services each year and continue to train!

When You Enroll Now…

With this plan, you will also be eligible for discounts on additional services, including supervisor training, document drafting, performance management programs, strategic business planning, and presentation skills coaching for your business’ marketing team.

This plan is available for new clients enrolling for a minimum of twelve months of consultation services. The cost is just $249/month. And, if you pay for a year in full at the commencement of services, you will receive a 10% discount! That’s a discount of nearly $300 and equal to more than a full month for free!

And, if you know someone who could benefit from this offer, please forward it along! If they mention you forwarded this offer when enrolling, you will both be eligible for an additional 10% discount upon enrollment.

For complete details and to get started, contact Jillian Bruni, MBA, Director, Business and Program Development, at illian@lmrcenter.com or (858) 753-1775. For more information about us, visit Law and Management Resource Center.